2014  has been an exciting year for me full of travel and photography.  I had a chance to host some really great people on my safaris and on my underwater trips.  Being out among nature I see the impact that humans have on wildlife: mostly negative, but sometimes positive.  As I review the year in photos in this blog, I  have decided to highlight some of the conservation issues I experience out in the field with my camera.

This annual favorite is a chance to see and appreciate these great predators up close.  We get to see some large breeding age female tiger sharks and loads of lemon and reef sharks. Unfortunately, many have fishing gear or scars from fishing gear cutting their mouths or slowly slicing through fins.  I seriously want to reach out and cut the line off, but this is a shark and touching would be a big mistake!

Africa has many conservation issues, some newer and some are very old problems. The one that is having a vast impact on wildlife, conservation, tourism, and economy is rhino poaching.  The region where my lodge is has a very high number of rhinos and thus has been changing as rhino poaching continues to increase.  I have seen my region go from no rhino poaching a few years ago to armed antipoaching road blocks and patrols.  This year has already seen more deaths to rhinos (and humans) from poaching than any other year.

We can still see white and black rhino on our game drives, but this is through the efforts of their caretakers: often they have had to remove the horns to keep their animals and land safe. 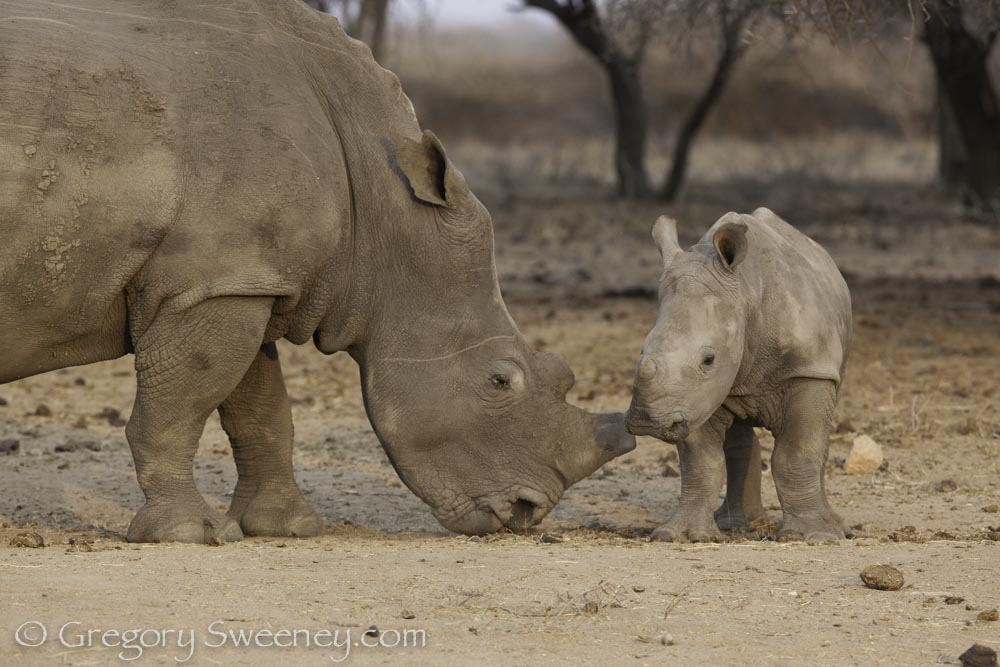 Each year whale sharks and manta rays aggregate in the Gulf of Mexico to feed on the krill bloom. The whale sharks are full grown and many are breeding females. This is a perfect opportunity to witness them in their feeding behavior. They seem to be completely unimpacted by our presence.  The encounters are regulated in a sustainable way making this a great educational opportunity for people to see, experience, an appreciate a fish that is little understood and in places overfished.

I have been photographing manatees for many years and have seen the evolution of  manatee conservation awareness and the rise of manatee tourism.  More and more people are impassioned and taking action for the manatees that I am confident that manatees will continue to be a stable if not increasing population in Florida.

Photographing sailfish is an athletic event. It is fascinating to watch them work as a team to keep a baitball and take turns disrupting and eating the fish.

While looking for sailfish we ran across an out of season whale shark in the water. When we got in to see it we discovered it was severely tangled in a fishing net dragging buoys with the ropes running through the mouth and across the gills.  I fear this whale shark may not last long.

Wild dogs were killed by farmers and homesteaders and remain a rare and endangered species. I have heard reports starting last year of some in our area and was fortunate to see some on my own land.  What a wonderful feeling to host wild dogs on our reserve! They travel around but repeated reports in our area seem to indicate they are more or less residents.

Numerous oil spills have made this species of penguin vulnerable.  This colony of Simons Town in the Cape Peninsula is a rare onshore nesting group – most nest on offshore islands.   In the nesting season it is possible to take a walk on the beach and have them walk right past you on the way to their nests.  They also take shelter around buildings and under cars in town. The locals have adapted since the penguins came to town about a decade ago.  I had one come into the restaurant where I was eating: hopping up the stairs to scout it out.

I consider this to be a positive conservation story: swimming with wild dolphins. These dolphins are not fed, trained, confined or otherwise forced to interact with the swimmers. They do it because they want to and they have been doing so for 30 years.  This proves you do not need captive dolphins in order to offer close encounters: you can do it in their own environment and on their own terms.  The charter captain has been documenting these pods his whole career and contributes his records to biologists.  It takes some speed and creativity to interest these intelligent creatures, but when you engage together it is magic.

If this has made you hungry to get out there next year, please contact me  at the link at the top or visit my website for details. Spaces on my trip schedule are filling fast.  www.gregorysweeney.com