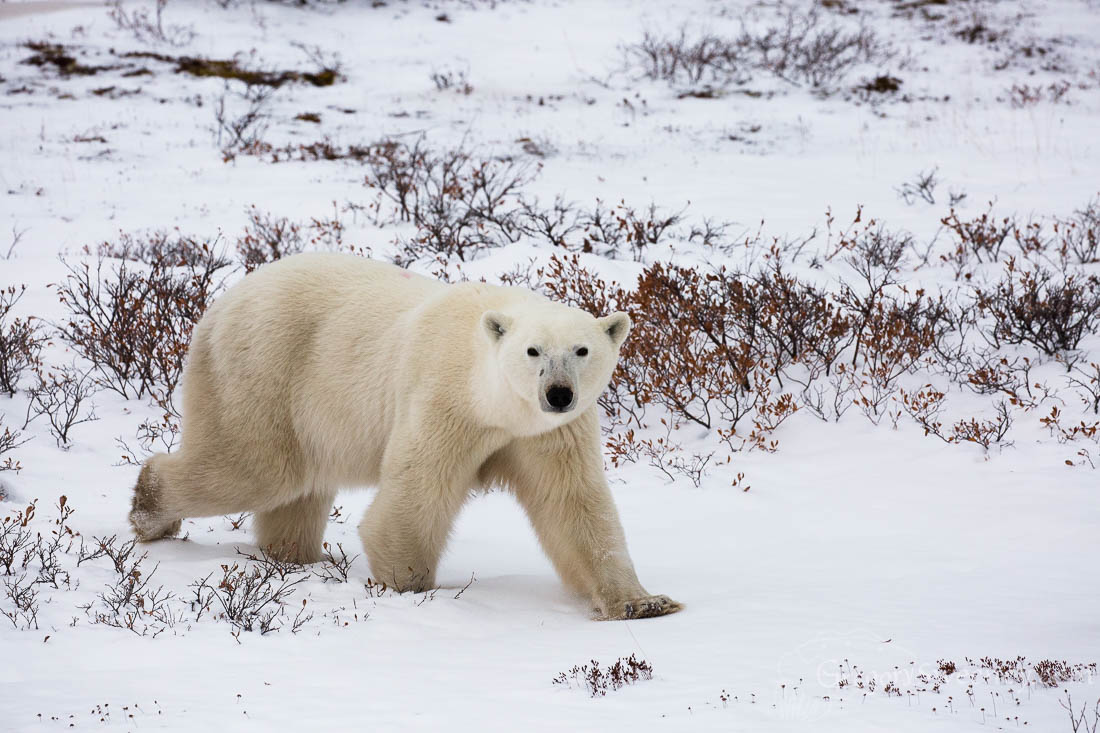 Every October and November, polar bears congregate in the Churchill area to await the return of the sea ice and access to their preferred prey: the ringed seal.  This year our trip to Churchill was in late October.  The weather was starting to get snowy, but the ice had not yet formed. Numerous bears were known to be in the area. 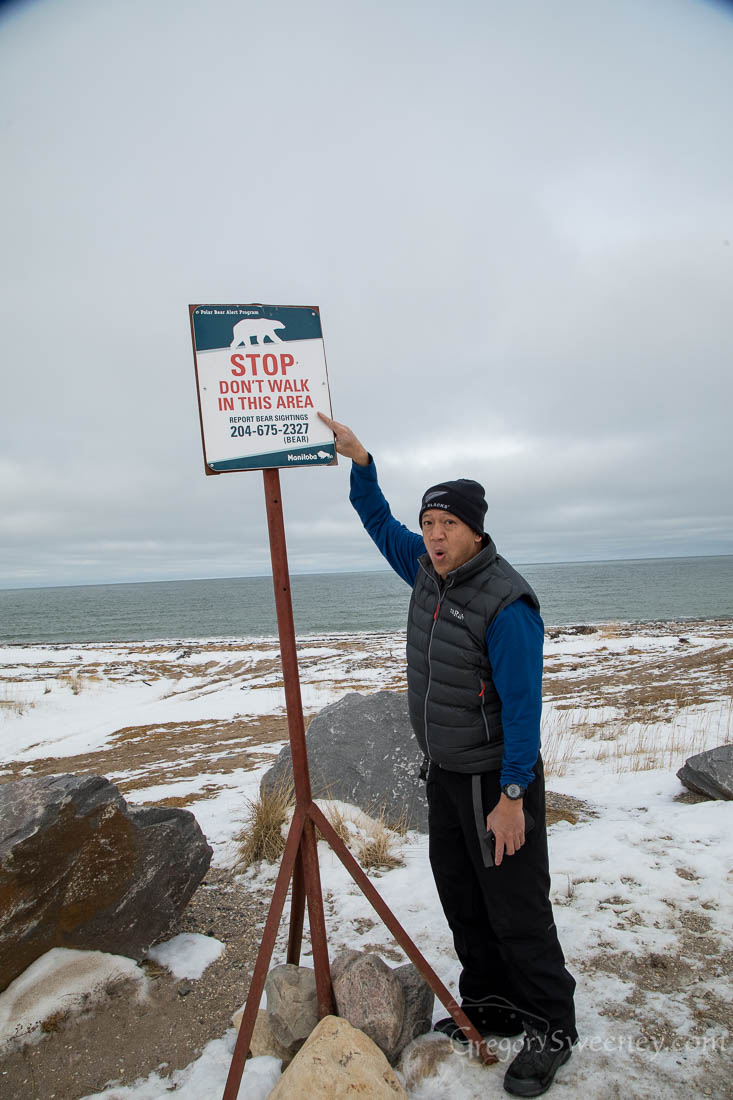 This year’s trip featured very nice weather under partly cloudy skies and snow.  The ice has started to form, but is not solid enough yet for the bears to move out.  The bears were gathered and very much anticipating the next few weeks when the ice will be fully formed for their trip out to seal hunting territory. 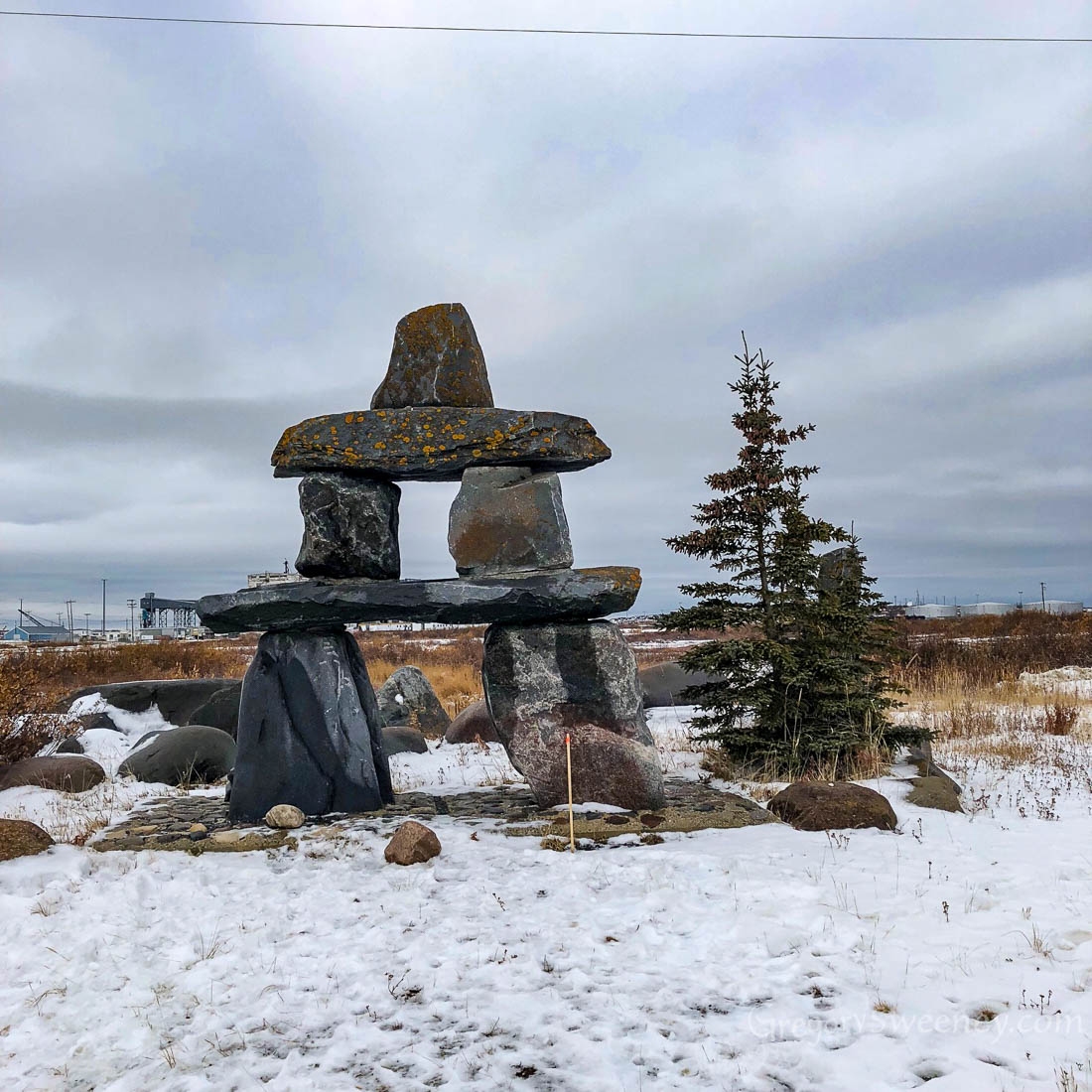 In my Camera Bag:

We traveled by way of Winnipeg and a flight up to Churchill.  Our group stayed inside the Churchill Wildlife Management Area at the Northern Studies Centre, a research facility that houses the scientists and their research. Each year the Centre welcomes a few visitors such as our group.  While at the Centre we were introduced to the ecofriendly facility, learned of the current research, and had a thorough orientation to polar bears in this region. It is a comfortable facility with meeting rooms, media rooms, a workout room, and we enjoyed the observation deck and night observatory dome. At times we had wildlife sightings from the windows of the Centre: a fox visited daily, a hare, birds, and a bear came close. 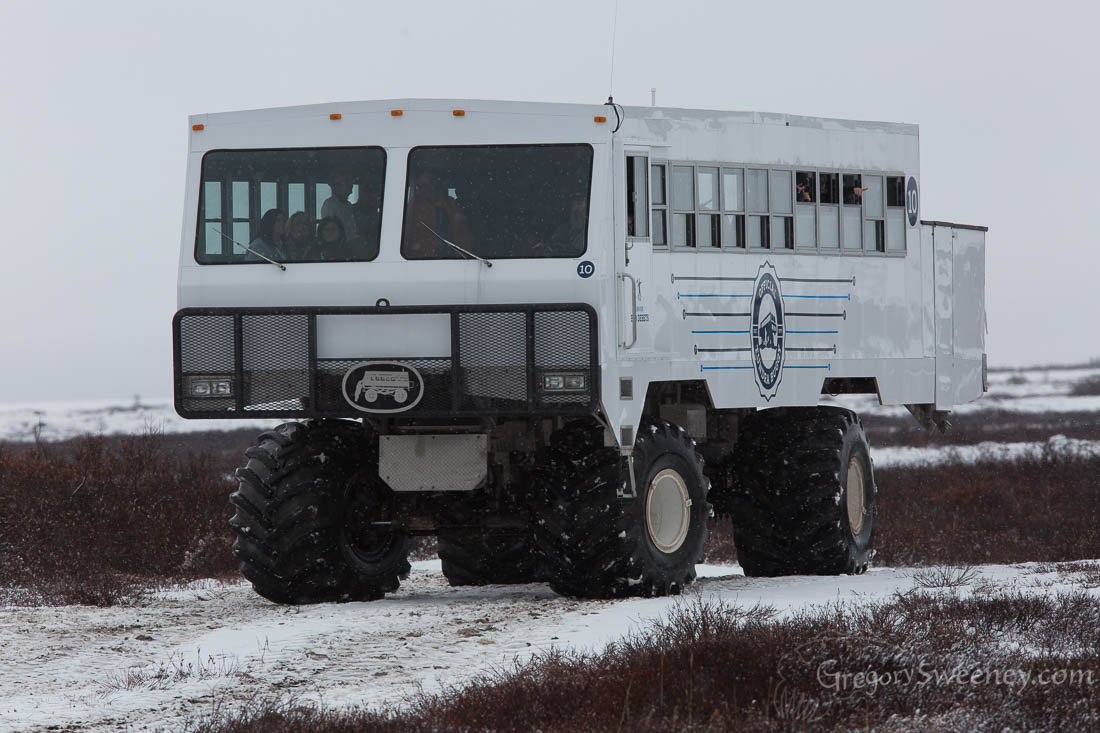 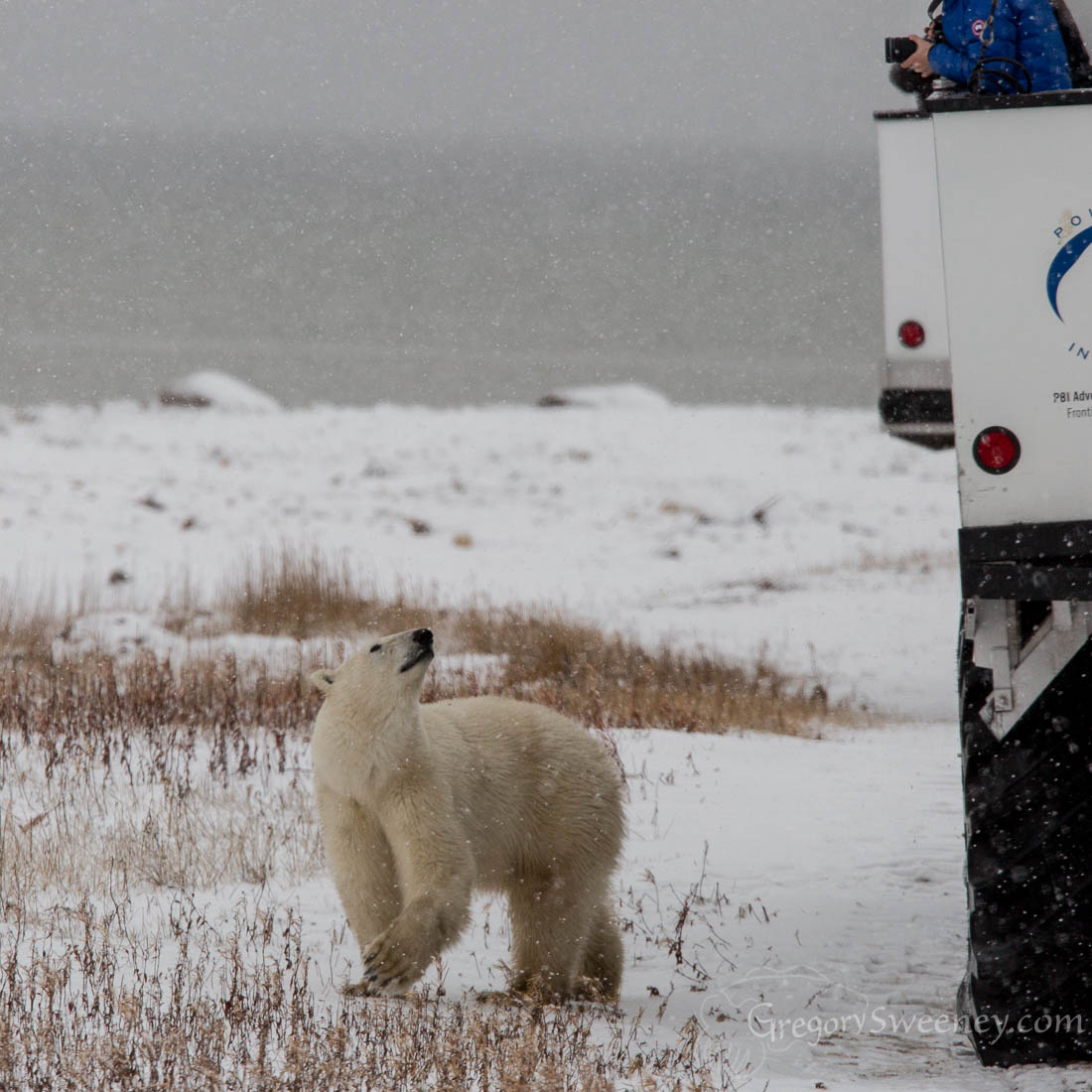 Our first day was spent on a specialized bear tundra vehicle in the Wildlife Management Area – a nature preserve.  The vehicle was comfortable and had window we could photograph through as well has the big open back deck for unobstructed photographs. 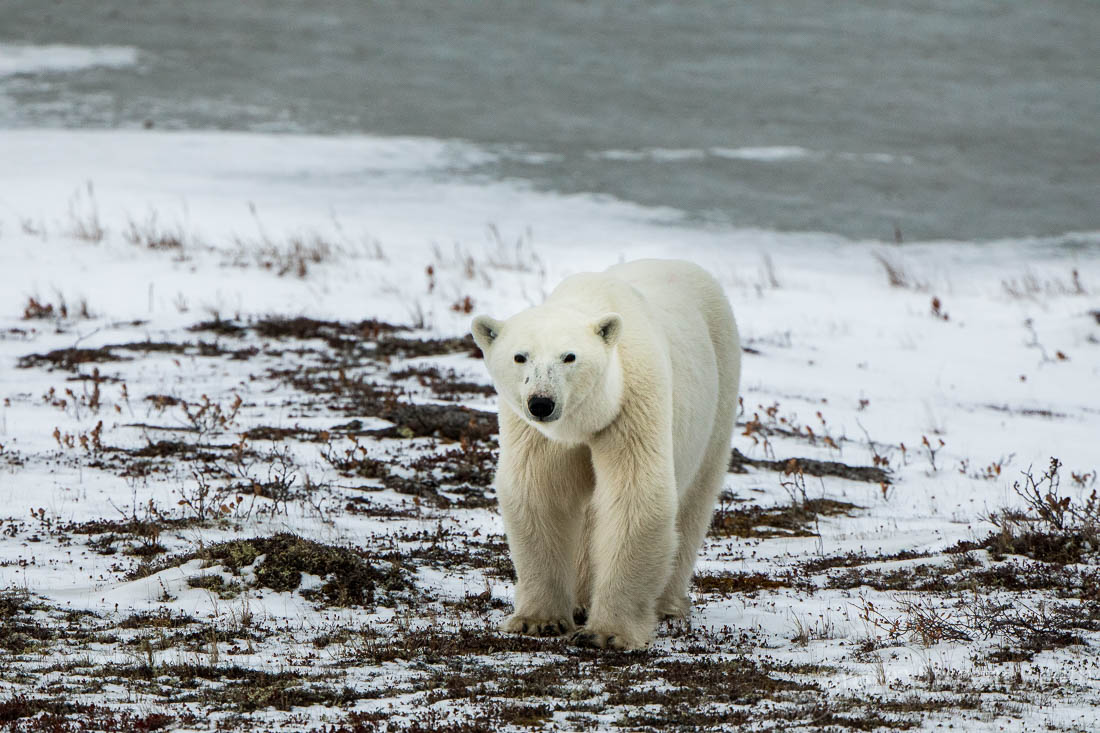 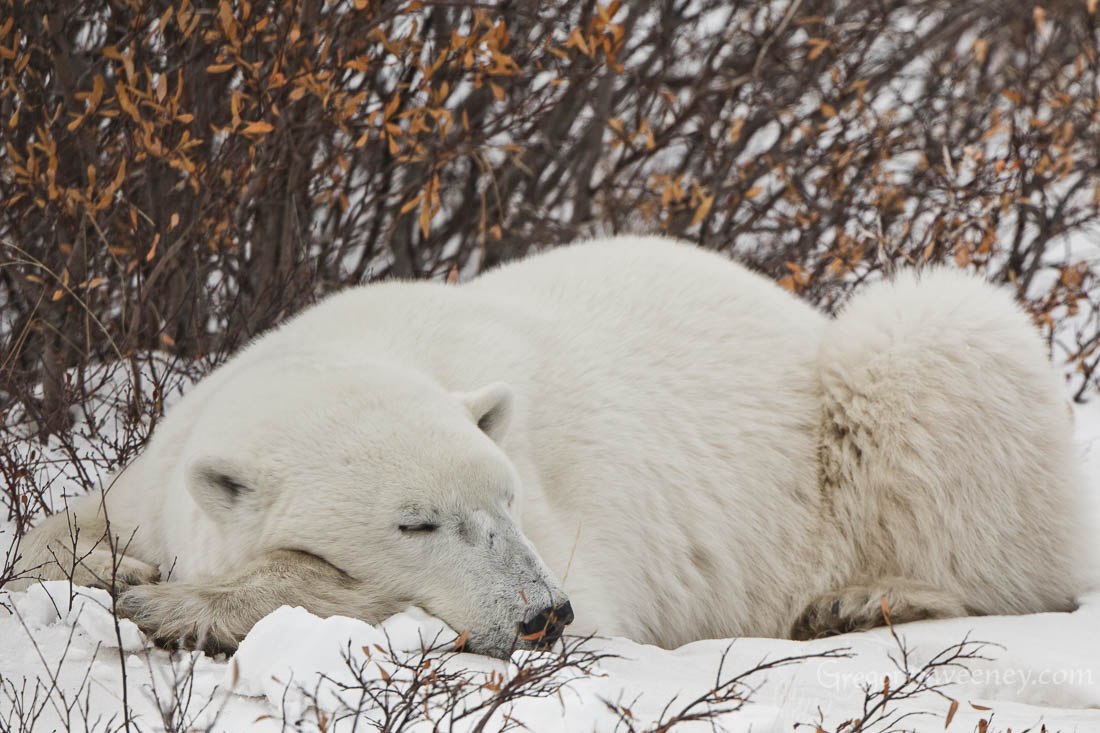 These vehicles are the only way to get into the Park area as the terrain is too rough for standard vehicles.

We had many bear sightings  from the bear vehicle.

Our 2nd day out was in a private van which takes us around the town area and bordering wildlife area. When out with our wildlife guide we are able to get out of the vehicle (when safe) and use our tripods to photograph the bears or arctic wildlife. 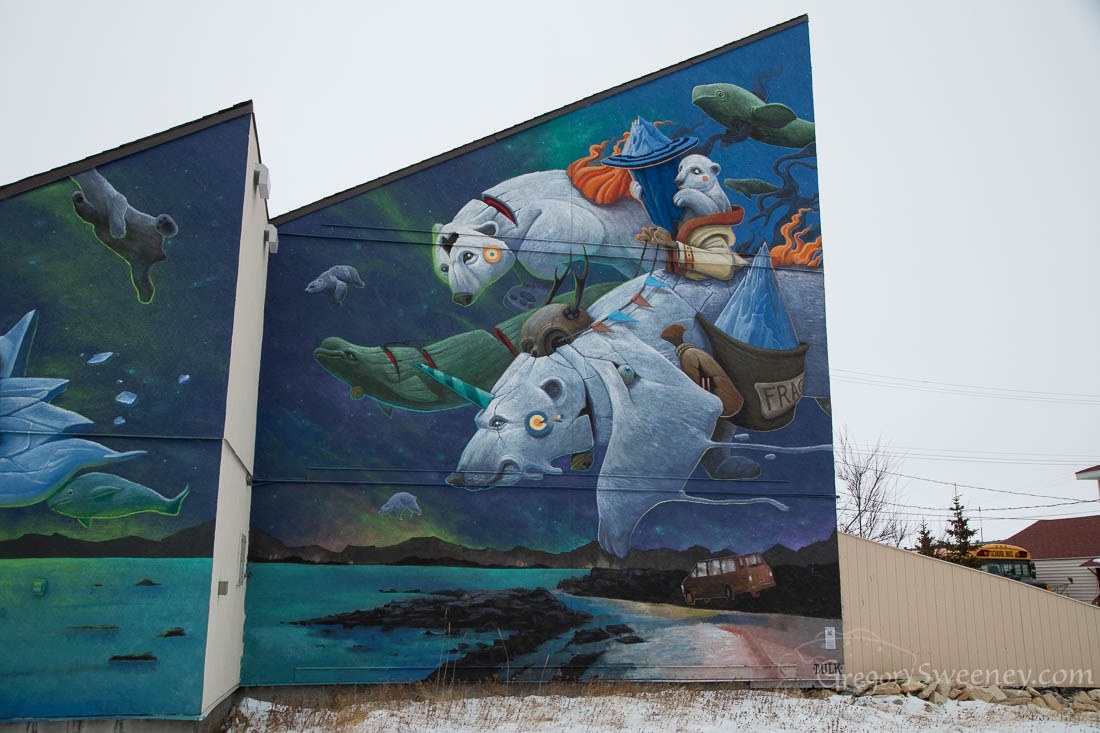 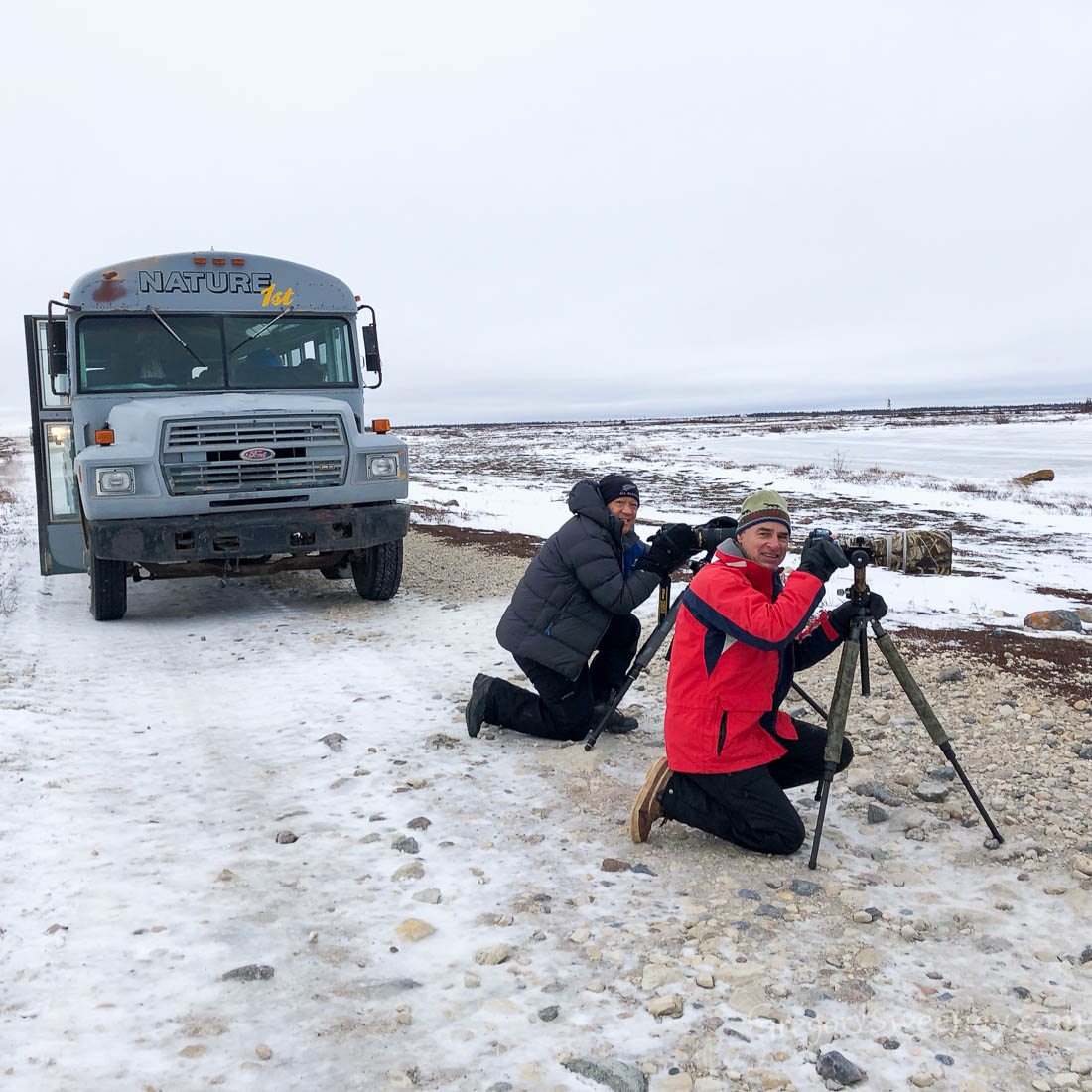 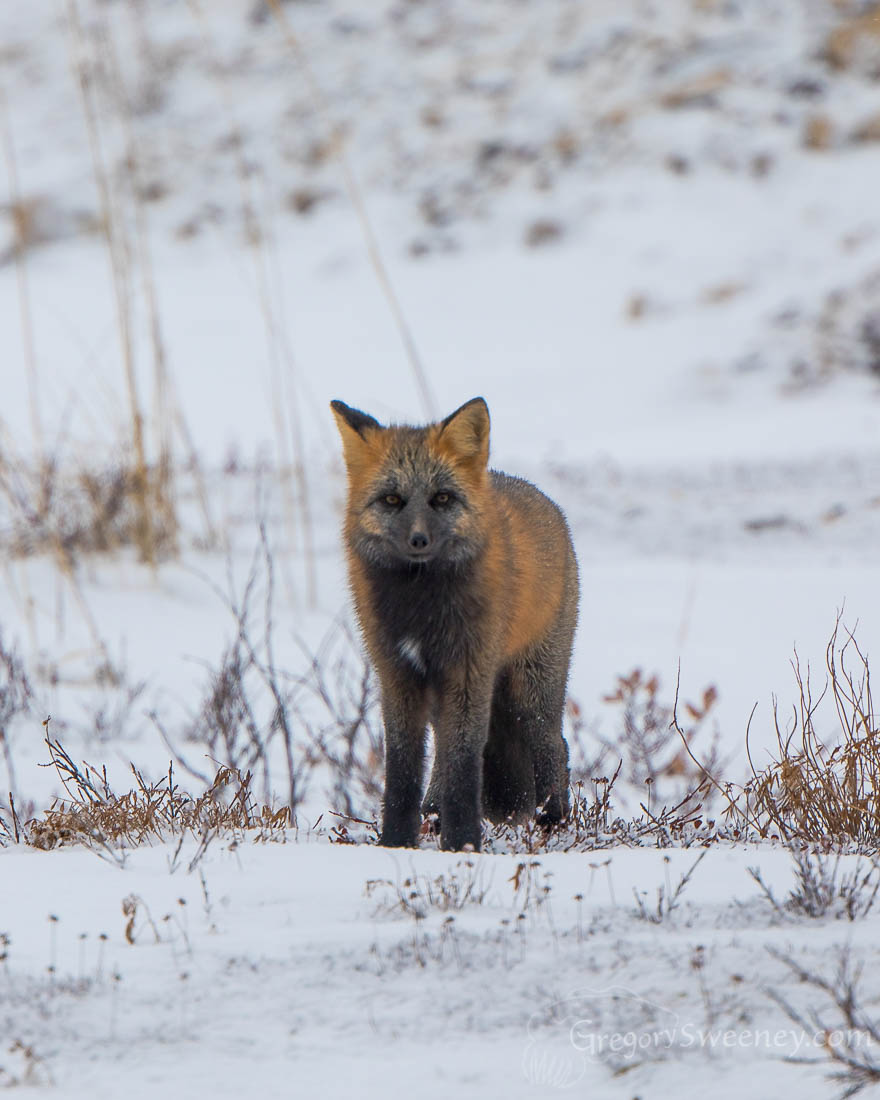 We had several opportunities to see bears up close and were able to place the van in such a way to get great images from outside the vehicle. 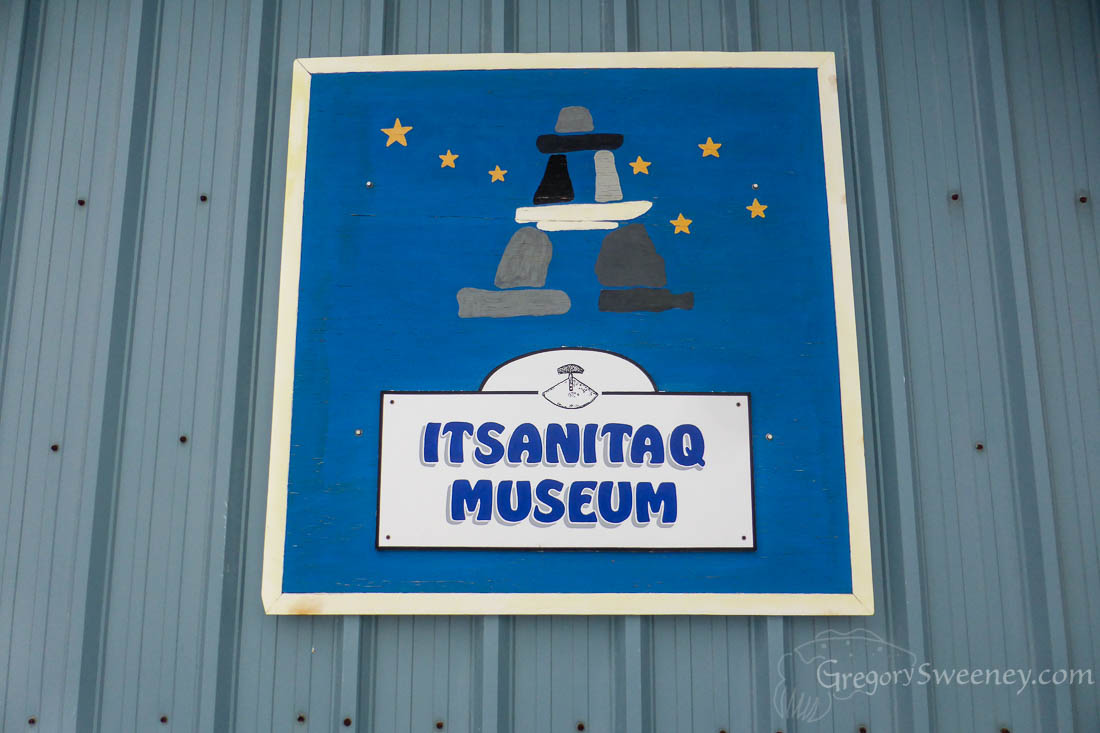 Learning about conservation in this Arctic Region is a primary goal of these visits. We learned about the impact of humans on the polar bears and the steps they take to keep bears from becoming a nuisance around human areas like the dump and in town. We were enlightened about the bear jail and how they trap and release the bears. 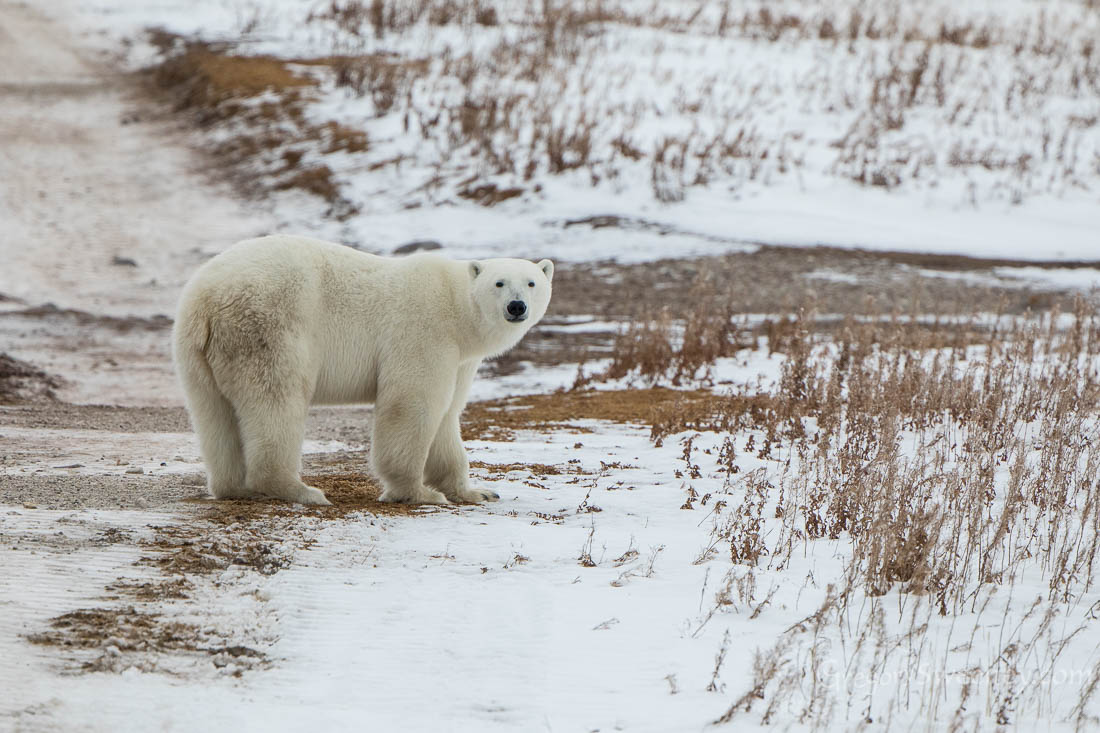 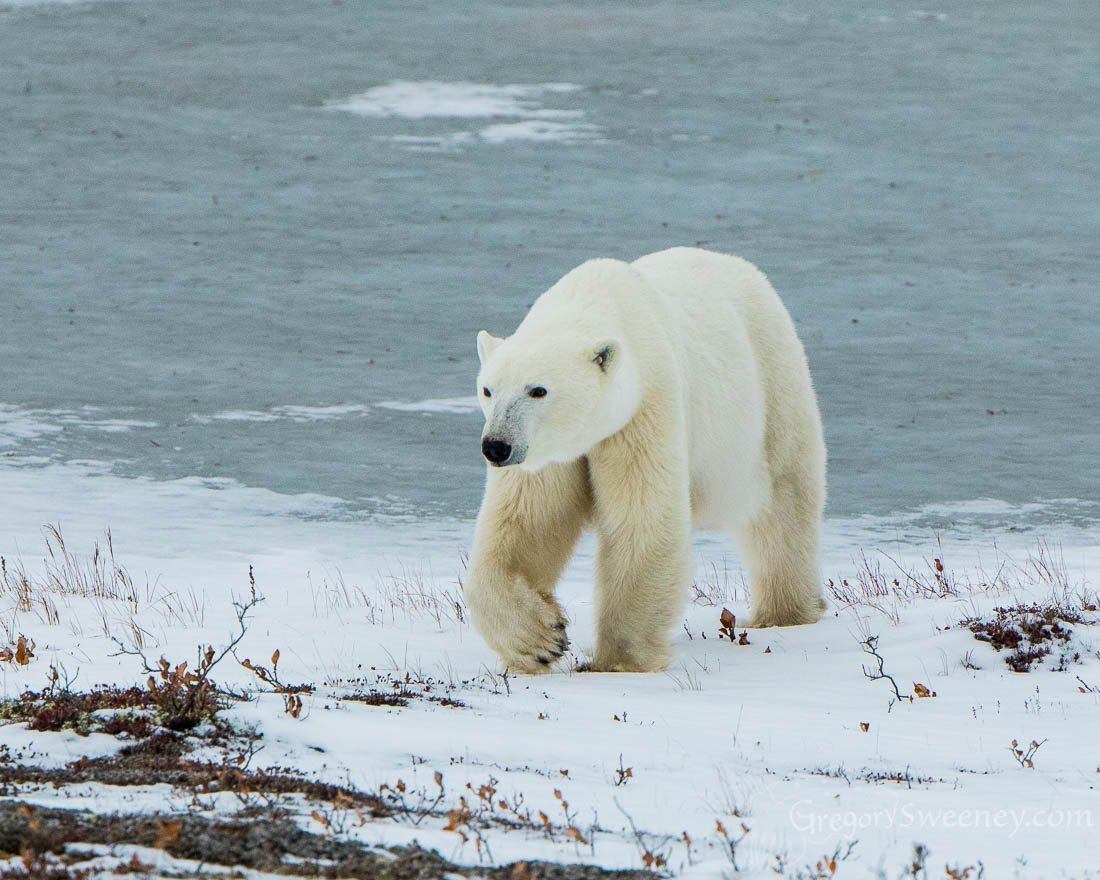 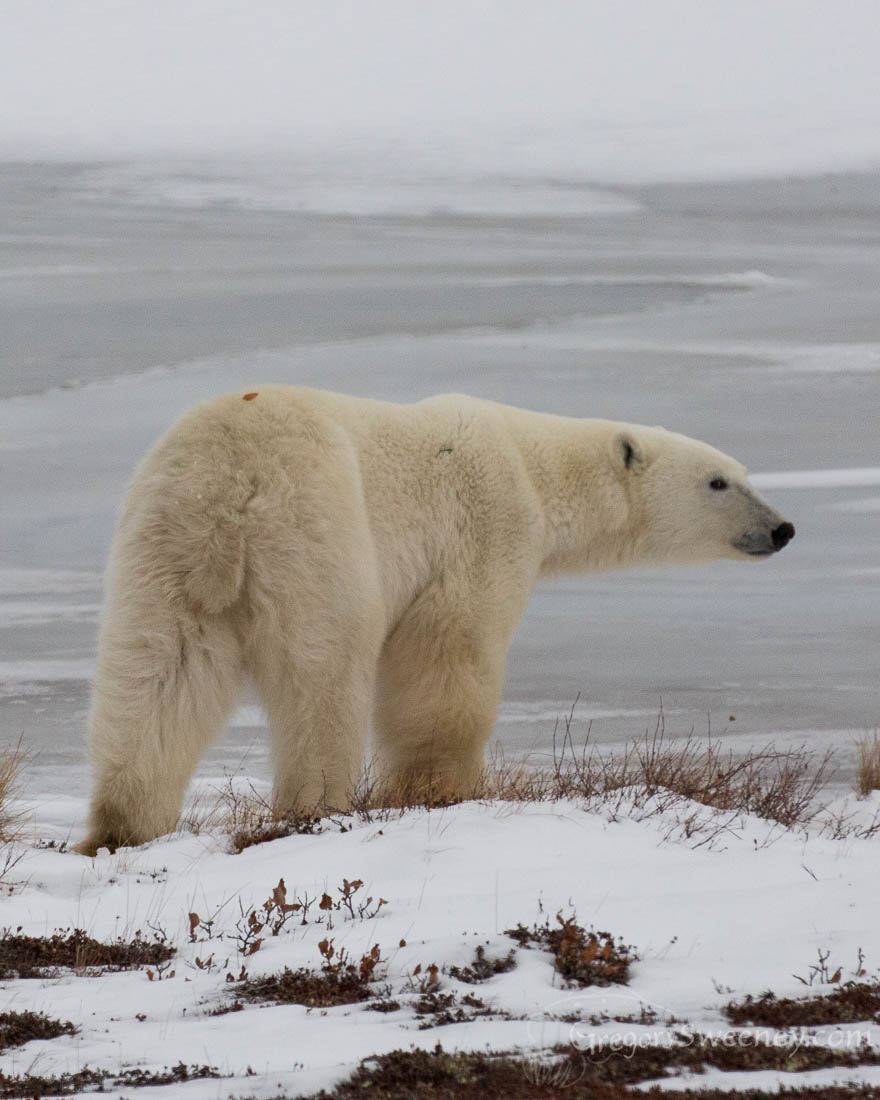 On our last day we were back with our private van and guide.

We had a chance to see a polar bear trying some hunting on a ice covered pond.

Wildlife such as  snowy owls, ptarmigans, and a fox were harder to find on this trip perhaps due to weather changing on our last day.

Our day ended in town at a restaurant and then straight onto the airport and our flight back to Winnipeg.

It was a great trip full of great chances to photograph polar bears and wildlife.  We are grateful for the opportunity to stay at the Northern Studies Centre for a quality yet affordable trip packed with wildlife and photography.

Get information about our next Polar Bears in Churchill Trip